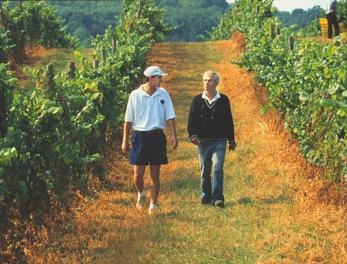 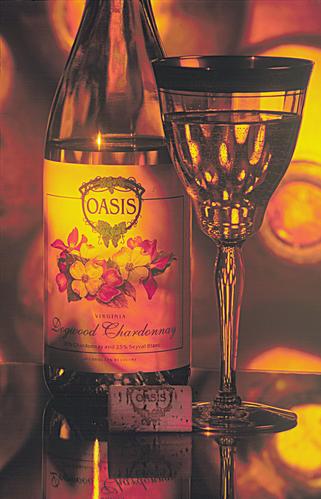 Above: From left to right, Son and Father (Tareq and Dirgham Salahi) inspecting the vineyards together at Oasis.

Below:  The Oasis Dogwood Chardonnay, one of the first wines sold at Oasis in the late 70s to mid 90s.

Oasis Winery was founded in 1977 by the Salahi family.  It was one of the first Virginia wineries and the first US winery to be rated Top 10 in the World by the Wine Enthusiast Magazine and later expanded operations to South Australia & the the Central Valley of Chile, South America.

The organization become a major leader in the industry, paving the way with unprecedented legislation that broke through local barriers that attempted to stop agriculture and tourism working.  The "Agri-Tourism” legislation that Tareq Salahi spearheaded, allows current farm wineries to grow and produce world class wines and host guests in unique hospitality environments at beautiful farm wineries.  Oasis is once again producing custom crush artisan wines from the varietals for which regions are best known: Chardonnay blended with Viognier, Cabernet Franc blended with Cabernet Sauvignon & Merlot. They have also produced an internationally recognized champenoise sparkling wine with blends of Chardonnay & Pinot Noir which was rated Top 10 in the World by the Wine Enthusiast Magazine!

The most recent Celebration cuvees coming from the central valley of Chile are hand crafted ultra-premium wines.

Oasis & Celebration Vineyards is still family owned and is one the oldest wine producers in the Commonwealth of Virginia & now ultra-premium productions in the Centrale Valley of Chile, South America. Founder/Owner owner is Tareq Salahi.  He is a University of California, Davis graduate with degrees in Enology (science of wine), Viticulture and Business Management.

Tareq has kept alive the Oasis family dream and is proud to dedicate this next chapter of Oasis Winery to his father (passed October, 2010) that started the family vision called OASIS®